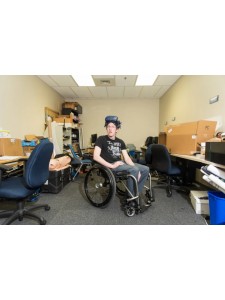 University of Texas at San Antonio

Associate Professor of Computer Science at The University of Texas at San Antonio, United States

Dr. John Quarles received his bachelor’s degree in Computer Science from The University of Texas at Austin in 2004 and his PhD in Computer Engineering from the University of Florida in 2009. He has conducted research in virtual, mixed, and augmented reality, serious games, and 3D User interfaces. Much of his work has focused on the accessibility and rehabilitation applications of these technologies for persons with disabilities. He has published numerous works in top computer science conferences and journals such as IEEE VR and IEEE TVCG. He has been awarded significant funding from the National Institutes of Health, the Department of Defense, and the National Science Foundation, including the prestigious NSF CAREER award in 2014. He was diagnosed with Multiple Sclerosis in 2004, resulting a variety of disabilities that have inhibited his use of immersive XR and required significant rehabilitation. He has the unique experience of being both a XR researcher and an end user with disabilities, which has informed his chosen research focus.

Telerehabilitation has potential to make rehabilitation more accessible, cost efficient, and effective. However, there are numerous technical and social barriers that hinder its application,  making it less accepted and practiced than in-person rehabilitation. For example, most commercial approaches to telerehabilitation cannot facilitate touch-based interactions between therapist and patient. Rather, patient-therapist interaction is limited to audio and 2D screens.  A potential solution for this is the Metaverse – immersive virtual, mixed, and augmented realities (XR) where multiple users in physically separate locations can interact and communicate naturally in 3D space, rather than being confined to the flat, 2D video boxes of teleconferencing applications like Zoom, Teams, and Webex. But is the Metaverse really a viable solution for telerehabilitation or is it just hype? To address this question, I will share my experience as a person with disabilities in rehabilitation, overview my own and others' prior research in virtual rehabilitation, and discuss the current gaps and potential future directions of Metaverse technology for telerehabilitation.